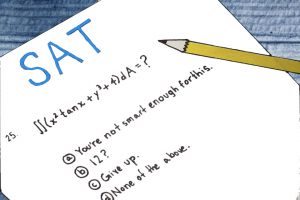 The SAT is owned, developed, and published by the College Board , a private, nganizAtionon- profit organization in the United States. It is administered on behalf of the College Board by the Educational Testion System, which until recently developed the SAT as well.The test is intended to assess students’ readiness for college. The SAT was originally designed not to be aligned with high school curricula, but several adjustments were made for the version of the SAT introduced in 2016, and College Board president, David Coleman , has said that he also wanted to make the test reflect more closely what students learned in high school.

On March 5, 2014, the College Board announced that a redesigned version of the SAT would be administered for the first time in 2016.The current SAT, introduced in 2016, takes three hours to finish, plus 50 minutes for the SAT with essay, and as of 2017 costs US$45 (US$57 with the optional essay), excluding late fees, with additional processing fees if the SAT is taken outside the United States. Scores on the SAT range from 400 to 1600, combining test results from two 800-point sections: mathematics, and critical reading and writing. Taking the SAT, or its competitor, the ACT, is required for freshman entry to many, but not all, colleges and universities in the United States. However, many colleges and universities are starting to experiment with test-optional admission requirements, and potential alternatives to the SAT and ACT. Starting with the 2015–16 school year, the College Board also announced it would team up with Khan Academy, a free, online education site to provide SAT prep free of charge.

Students receive their online score reports approximately three weeks after test administration (six weeks for mailed, paper scores), with each section graded on a scale of 200–800 and two sub scores for the writing section: the essay score and the multiple choice sub score. In addition to their score, students receive their percentile (the percentage of other test takers with lower scores). The raw score, or the number of points gained from correct answers and lost from incorrect answers is also included. Students may also receive, for an additional fee, the Question and Answer Service, which provides the student’s answer, the correct answer to each question, and online resources explaining each question.

The corresponding percentile of each scaled score varies from test to test—for example, in 2003, a scaled score of 800 in both sections of the SAT Reasoning Test corresponded to a percentile of 99.9, while a scaled score of 800 in the SAT Physics Test corresponded to the 94th percentile. The differences in what scores mean with regard to percentiles are due to the content of the exam and the caliber of students choosing to take each exam. Subject Tests are subject to intensive study (often in the form of an AP , which is relatively more difficult), and only those who know they will perform well tend to take these tests, creating a skewed distribution of scores.

The percentiles that various SAT scores for college-bound seniors correspond to are summarized in the following chart.

In 2015 the average score for the Class of 2015 was 1490 out of a maximum 2400. That was down 7 points from the previous class’s mark and was the lowest composite score of the past decade.