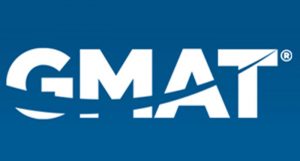 The Graduate Management Admission Test GMAT  is a computer adaptive test (CAT) intended to assess certain analytical, writing, quantitative, verbal, and reading skills in written English for use in admission to a graduate management program, such as an MBA.It requires knowledge of certain specific grammar and knowledge of certain specific algebra, geometry, and arithmetic. According to the test owning company, the Graduate Management Admission Council  (GMAC), the GMAT assesses analytical writing and problem-solving abilities, while also addressing data sufficiency, logic, and critical reasoning skills that it believes to be vital to real-world business and management success. It can be taken up to five times a year. Each attempt must be at least 16 days apart.

GMAT is a registered trademark of the Graduate Management Admission Council. More than 7,000 programs at approximately 2,300 graduate business schools around the world accept the GMAT exam as part of the selection criteria for their programs. Business schools use the test as a criterion for admission into a wide range of graduate management programs, including  MBA, Master of Accountancy, Master of Finance programs and others. The GMAT exam is administered in standardized test centers in 114 countries around the world.According to a survey conducted by Kaplan Test Prep, the GMAT is still the number one choice for MBA aspirants despite the increasing acceptability of GRE scores.According to GMAC, it has continually performed validity studies to statistically verify that the exam predicts success in business school programs.

In 1953, the organization now called the Graduate Management Admission Council (GMAC) began as an association of nine business schools, whose goal was to develop a standardized test to help business schools select qualified applicants. In the first year it was offered, the assessment (now known as the Graduate Management Admission Test), was taken just over 2,000 times; in recent years, it has been taken more than 230,000 times annually. Initially used in admissions by 54 schools, the test is now used by more than 7,000 programs at approximately 2,300 graduate business schools around the world. On June 5, 2012, GMAC introduced an integrated reasoning section to the exam that aims to measure a test taker’s ability to evaluate information presented in multiple formats from multiple sources.

The GMAT exam consists of four sections: an analytical writing assessment, an integrated reasoning section, a quantitative section, and a verbal section.Total testing time is three hours and seven minutes. Test takers have 30 minutes for the analytical writing assessment and another 30 minutes to work through 12 questions, which often have multiple parts, on the integrated reasoning section and are given 62 minutes to work through 31 questions in the quantitative section and another 65 minutes to get through 36 questions in the verbal section.

The quantitative and verbal sections of the GMAT exam are both multiple-choice and are administered in the computer-adaptive format, adjusting to a test taker’s level of ability. At the start of the quantitative and verbal sections, test takers are presented with a question of average difficulty. As questions are answered correctly, the computer presents the test taker with increasingly difficult questions and as questions are answered incorrectly the computer presents the test taker with questions of decreasing difficulty. This process continues until test takers complete each section, at which point the computer will have an accurate assessment of their ability level in that subject area and come up with a raw score for each section.

On July 11, 2017, the GMAC announced that from now on the order in which the different parts of the GMAT are taken can be chosen at the beginning of the exam.

Three options will be available at the test center:

In April 2018, the GMAC officially shortened the test by a half hour, shortening the verbal and quant sections from minutes each to 65 and 62 minutes, respectively, and shortening some of the instruction screens.